skip to main | skip to sidebar

People who are not in international couples: Stop. 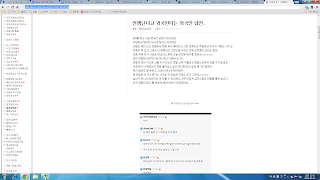 Now that my Korean is improving, Busan is getting into the (much appreciated) habit of sending me little bits and bobs in Korean that he thinks may be of interest. It's nice to be able to have access to these kinds of things, without relying on him to retell things to me that he has read, seen or heard. But it's creating a bit of tension on the front of the foreigner vs. Korean way of seeing certain issues. Opening up more dialogues obviously means opening up more room for differences of opinions, and expanding our the interaction of our different cultural understandings, or views from our differing respective positions.

It's not always cultural. As with most things, a big part of it is just our personalities, and as usual with us, there are sometimes things we take opposing positions on that are inverse of what one might expect. B, in general, is a little less critical of all things media and government related than I am, whether that be the American or Korean media or government.

He sent me the above a couple of days ago. It concerns a story told by a Korean girl who had been dating a foreign guy for eight months, when he suddenly announced that he was going back to his country, and broke it off. She says she knows it's natural for couples to come to an end, but to have things end so suddenly was what was difficult for her.

That's a fair enough response. But the comments underneath are what annoyed me. First of all, that it seems like he just came to earn a lot of money and have a vacation. And then another commentor said that whenever they see a Korean woman with a foreign man, they always think they will wind up with a Korean man in the end, because foreign men will always go back to their home countries.

And then, a comment that I don't necessarily have the language skills to interpret correctly. Directly put, it means, "Don't marry a Korean man. Sad. Go abroad and marry a foreigner." (The word 불쌍하다 can be translated as "pitiful" or "pathetic", but those words in English sometimes have a harsher connotation than the way the word is used in Korean, so I'm being generous.)

It's not horrible. Certainly not in light in the things JTBC and MBC have come out with recently (and no, I don't have the energy or the desire to rehash that bullshit yet again). It's not even that these are not fair points. It's just that I don't really care to hear the opinions of people who don't know shit about shit anymore.

I don't know what B expected my reaction to this to be, or even why he sent it -- he probably didn't have any further motivation than, 'Oh, here's a thing about foreigners.' But he didn't seem to quite expect me to respond the way I did, which was to say that I wish people who live in Korea, who speak Korean, who hang out with Koreans and who stay in Korea would stop expressing opinions about foreigners, and specifically Korean/foreign couples, like they know what they're talking about.

There's not a start to a new school year that goes by without at least one ajumma coworker feeling the need to extend a protective wing over me, when they find out my boyfriend is Korean, and warn me that Korean men usually aren't serious about foreign girlfriends. As if they somehow might know more about my boyfriend and his motivation for being with me, not to mention the general habits of Korean men who date foreign women, than I do. I'm always tempted to ask them how much experience they have with the subject, and furthermore, how many foreign female/Korean male couples they personally know. But the question would merely be sarcastic, because we already know the answer to that. Don't we?

Which is not to say that it doesn't happen. Of course, it does. Just as it happens that Korean girls sometimes get dumped with little to no warning by foreign boyfriends who decide, for whatever reason, that it's time to go home. And part of that is the risk that we take -- the same as many other risks, like being cheated on or being dropped for any other number of reasons. So what?

As I put it to B, when he asked me to explain more, this isn't about being defensive of foreigners. I get just as irritated when Korean men (or women) are the target. Because it goes back to a point I've discussed many times before, which is that people need to stop thinking that interracial, intercultural or international relationships are public property.

If I were Korean, and dating a Korean man, would my coworkers, upon finding out that I have a boyfriend, feel the need to warn me that sometimes men cheat? Without knowing anymore at all about my boyfriend or our relationship? How far overstepping of boundaries would that seem? And why is what they're doing different?

Whenever I see a woman with a man...

That is fucking ridiculous. And it is no less ridiculous to do it just because a couple is interracial.

As I put it to B, he's met a lot of international/interracial couples through me. How many of those couples have or would ever just up and abandon their partner, because their plans changed? How many have just left to go back home, either at all, or without extensively discussing all factors involved with their partner, as an equal?

Does it happen? You fucking bet it does. But you need more than supposition, one example and seeing interracial couples walking down the street to talk about it intelligently.

But then talking about things intelligently is not the general public's forte.
Posted by I'm no Picasso at 19:39

that's true... there are many more ways a relationship can end suddenly, that have nothing to do with interracial-coupleness. but yeah... people are always gonna feel like they need to butt-in when you tell them you're dating someone of another race... wtf...

although, I live in Japan, and it seems to me that reactions are lessening a bit. it seems a few years ago, the reaction to my having a Japanese boyfriend was like "WTF?!?!? NO WAY!!! HOW?? WHY??", but now it's like if i say i have a boyfriend people go "is he Japanese?" and then nod sagely when I answer... lol.

I'm no Picasso
This is a tale of the seaports where chance brings the traveler: he clambers a hillside and such things come to pass.

Other places INP is: