skip to main | skip to sidebar

Today I made what I thought was a safe assumption that, on the whole, I wouldn't be encountering the students, and decided to wear, of all things, a dress to work. I've recently given into the Korean obsession with all things tights. Turns out, tights are even more comfortable than jeans. But I'm still a little self-conscious about all that they reveal. The dress could've been shorter, but it could've been longer as well.

Well. As I came out of the building, I encountered the entire fucking school soccer team, all revved up on adrenaline and hormones from their hard workout. They all came running over to sexually harass me.

Now, I don't object to being told I have a nice "shape". But I do object to being told this by my students. I've let a lot of shit slide out of the third graders, since I've stopped teaching them, but I can't get over the idea that it's just not polite to make such comments to your teacher. The topper came when one student shouted, from across the field, "Oh! Honey thighs teacher!"

Now, this phrase deserves some explanation. It's not as straight-forwardly complimentary (or sexual) as it may seem, from a native English speaking perspective.

You see, there's this singer. Her name is UEE (유이), and she's in a group called After school. She's known for not being a "conventional" beauty, but for attracting attention, nonetheless. She's also known, commonly, as Honey Thighs. The reason for this is that her legs are thick, curvy and athletic -- not fat at all by Western standards, but challenging to Korea's ideal image of how a girl's legs should look. See below:

UEE's honey thighs proudly on display in the center. 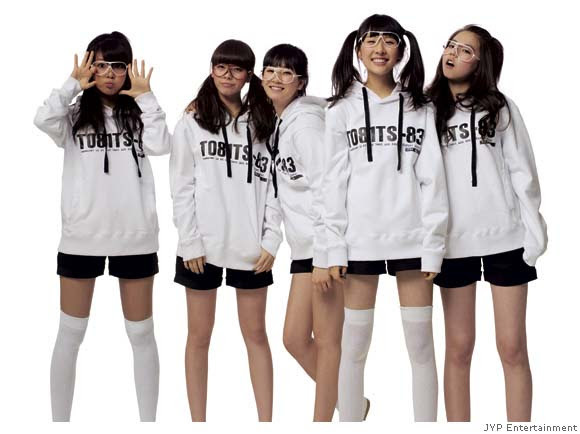 Some people argue that UEE is -- seriously, it pains me to even say it -- fat. Her legs, particularly her thighs, are fat. End of. But lately another voice has been fighting back, saying that Honey Thighs are were it's at, if we're talking 섹시.

All of this serves to remind me of how strange it was, recently, to be in the UK, where at 5'8, firmly straddling the line between a US size 8/10, I am "normal" sized. In the ROK, however, I am pushing the limits of the largest size most shops carry. Even then, if I'm going with skinny jeans, I have to buy a size that gaps in the waist, in order to cram my hips and thighs inside. And I'm definitely not bottom-heavy.

Anyway, all of this is mostly to say that, once school starts back on Monday, I'm definitely shelving the dresses. It's back to jeans and cardigans. I don't need this shit.

(Note for reference: My thighs in no way resemble UEE's. If they did, I would live the rest of my life in public minus pants.)
Posted by I'm no Picasso at 17:10

Liz teacher in a dress?!?! i gotta see this craziness. bring it to busan so we can take pictures^^

p.s. - for some reason k-pop has leeched its way into my system and i know way more than i care to admit. but i think UEE is part of After School not 소녀시대. i would double check with the next 12 year old boy or girl you come across

Willie you're right. UEE is Afterschool and it's Tiffany from GG that's also called Honey Thighs. I'm not so good with the girl groups.

Don't give up on dresses, Liz. You shouldn't allow silly boys get to you. Do these kids dare be so bold with Korean lady teachers? When I was a kid my school wouldn't tolerate us speaking like that to a foreign or Scottish lady!

I, tromping around Korea in jeans and hiking boots, had at least two different kids ask me if I was a boy.

It's one thing if they're in first grade and don't know what they're saying... It's a completely different thing if it's knowingly said. Make an example out of one kid - whatever punishment scheme you have at your school, that sort of talk to the teacher should be dealt with sooner rather than later... Whether you're coming back the next year or not... If it shocks them, all the better...

Billy -- Not giving up on them, of course. But, like eyeliner, I'm just putting it on the list of things I can't wear to school if I don't want a constant fuss on my hands throughout the day. Some things you try to change; some things you just accept. When you're outnumbered 1500 to one, there's a lot you just accept.

Helena -- I've had more the one Korean man, after I flat out refuse "oppah" say, "Well call me hyung then. Yes... actually hyung is right!"

Chris -- This is a complicated ... well I'm going to do my best to shorten my response here. Basically, I'm not a hardass just for the sake of being a hardass. Mostly because it gets you nowhere with teenage boys. If something is blatantly intended as disrespectful, such as "Hey sekshi gull!" shouted after me down the sidewalk, then I don't hesitate to get right in a students face and explain quite severely that I am their teacher, not their friend.

The boys in this case, however, were not intending to offend, as partially shown by the tacking on of "teacher" to the end of the phrase, oddly enough. It's common enough for the boys, especially the older ones, to comment to the female teachers about something regarding their looks -- new makeup, weight loss, clothing or body shape. It's one of those cultural things that carries over -- we all know how blunt Koreans can be about physical commentary, both good and bad. It's just not considered as disrespectful, if done in a respectful manner, if that makes sense. They weren't trying to make me uncomfortable or belittle me, so I just called them "byeontae" and moved on.

What does MJ Oppa think about your honey thighs?

You know, I haven't got around to asking him yet. In fact, I'm kind of hoping he hasn't gotten around to noticing them yet.

We should have a least a couple of beers together before we get honey thighs involved, don't you think?

I'm no Picasso
This is a tale of the seaports where chance brings the traveler: he clambers a hillside and such things come to pass.

Other places INP is: